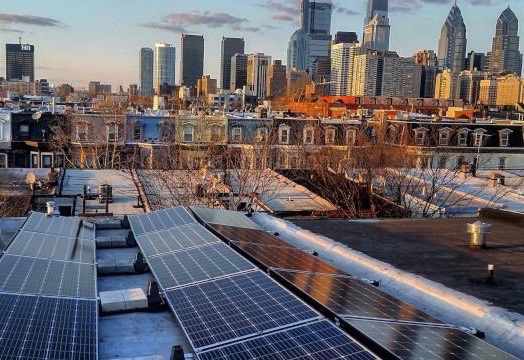 Philadelphia sustainability czar Christine Knapp flew to San Francisco on Wednesday to reenlist the city in the international war on climate change. Philly will join other cities from around the world in signing on to meet seven new goals at the Global Climate Action Summit.

The most significant news to come out of Philadelphia’s participation in the summit is a new commitment to creating the city’s first comprehensive climate change mitigation and adaptation plan. If the Kenney administration meets its goal, the plan will be complete by 2020 and will facilitate Philly’s pursuit of the ambitious goals set by the United Nations in 2015 with the Paris Agreement pact to fight climate change.

The forthcoming local plan will build on various other city documents, including a municipal climate adaptation plan published in 2015 to create a singular playbook for city agencies.

“I think that is part of the value of creating a single climate action plan — which is one of the things I want to get out of that plan due by 2020 — so that people will have sort of a more organized understanding of what all of our work is doing, and our goals, and whether we’re meeting them or not,”  Knapp said. Mayor Jim Kenney appointed Knapp to direct his Office of Sustainability soon after his 2015 election into office.

Two of the other goals mirror commitments already made at City Hall — advancing towards zero waste while achieving 100 percent renewable electricity by 2035, and relying exclusively on renewable energy by 2050. The other goals concern the pursuit of equity and justice in the implementation of climate goals, job creation, collaboration across sectors, science-based decision-making and the integration of forests into city development plans. All of these reflect priorities previously articulated by the administration.

“Philadelphia is proud to stand alongside so many other cities in leading the way on climate change,” said Kenney in a public release. “Nearing the end of one of our hottest and wettest summers on record, we’re already feeling the harmful effects of climate change and are committed to doing our part in this fight.”

While at the Global Action Summit, city sustainability officials plan to show off their relatively new action plan for clean energy. The Powering our Future plan was drafted in November and went through a public comment period that ended last month with the release of the Clean Energy Vision Action Plan. The document establishes short-term strategies for renewable energy implementation. The newest tool presented in the action plan is a city-wide solar rooftop application that estimates the solar suitability of every building, qualifying it as good, better and best.

“So we think this was a helpful tool for people to understand what the potential is,” Knapp said. “And once they know that there’s some potential, hopefully, they’ll take the next step to actually going ahead and installing solar.”

Above and beyond the new solar app, the action plan focuses on the following areas: implementing the municipal energy master plan; growing existing clean energy programs — such as the energy benchmarking program; enforcing the new 2018 commercial building codes; supporting Green Building United’s Philadelphia 2030 District partnership; implementing the Philadelphia Energy campaign advancing new local programs and policies through City Council; and supporting new state legislation to advance clean energy such as solar and nuclear. The plan also emphasizes climate initiatives that go beyond the built environment such as the zero waste plan and the transportation plan.

“This is a lot of work,” Knapp said. “So, one of our challenges is just [having] the capacity to be able to carry it all forward. But I think we feel pretty good about knowing that they are all achievable and impactful things that we think we can really do.”

The biggest priority, according to Knapp, is finalizing its renewable purchase agreement. The city is currently evaluating proposals for renewable energy developers, and Knapp said she would like to get City Council approval by this fall to avoid changing the cost of the project if federal tax credits go away or new tariffs are set up.

This article originally appeared in WHYY.