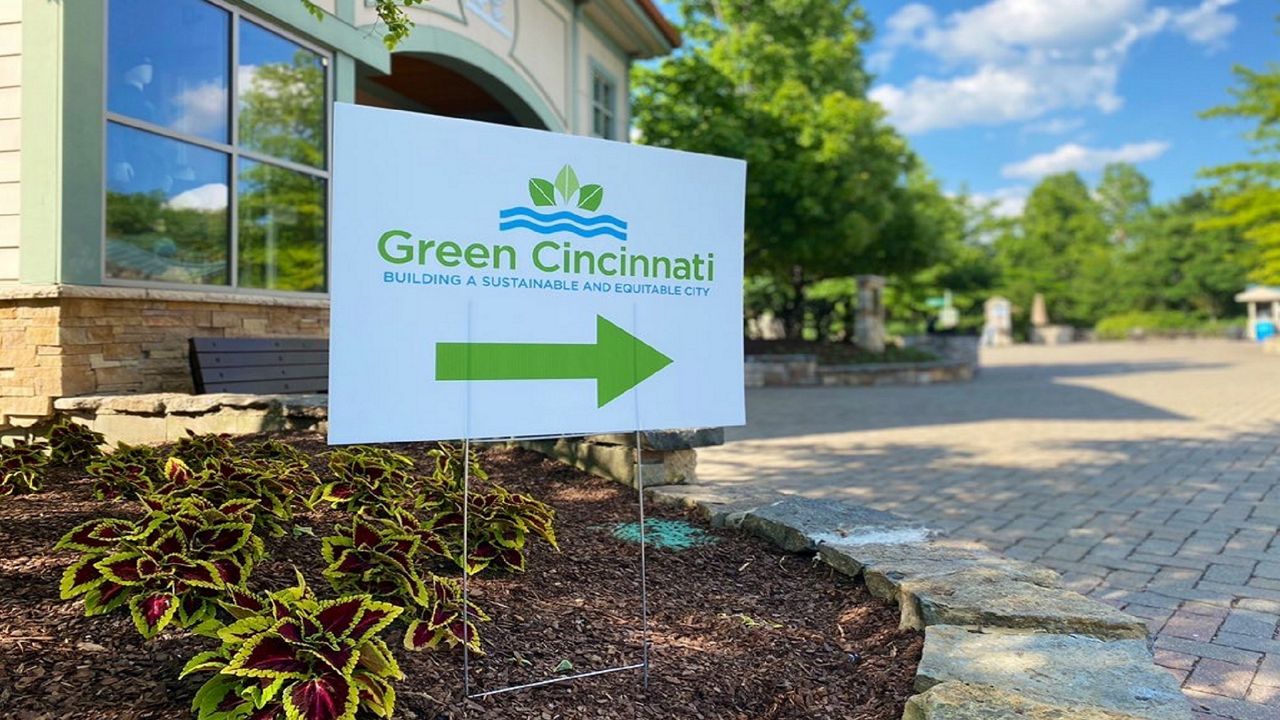 CINCINNATI, Ohio — Five years ago, the city of Cincinnati and a collection of community partners and residents came together to compile a list of 80 recommendations to help cut local carbon emissions by 80% by the year 2050.

It was part of the update process for the Green Cincinnati Plan, the city’s playbook for crafting policies related to climate change.

Since 2018, the city has enacted or is near completion of 85% of those goals, according to the city’s Office of Environment and Sustainability.

But new scientific data suggest more needs to be done and much quicker than once projected.

On Tuesday, about 300 people — city leaders, environmental organizations, business reps, and community advocates — gathered at the Cincinnati Zoo and Botanical Garden to kick off the five-year renewal of the Green Cincinnati Plan.

The event opened with comments from Mayor Aftab Pureval and City Council member Meeka Owens, who chairs the city’s committee on environmental issues. 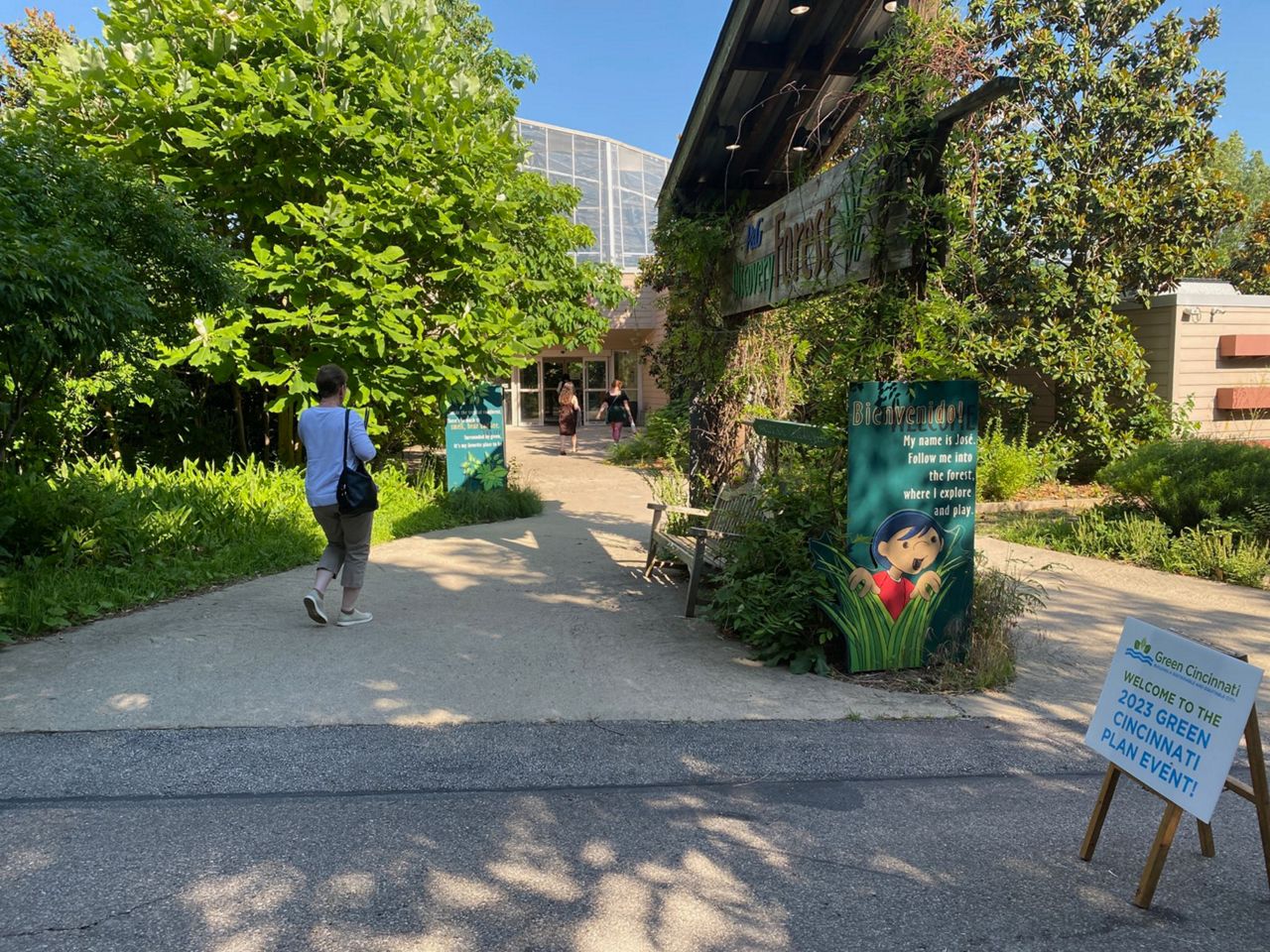 The education at the Cincinnati Zoo and Botanical Garden, where the first meeting of the 2023 Green Cincinnati Plan update took place. (Casey Weldon/Spectrum News 1)

Since the last Green Cincinnati Plan update, Cincinnati has funded the construction of a massive solar energy array on former farmland about 45 miles east of downtown Cincinnati. They also established a Cincinnati 2030 District, which got area building owners to commit to cutting their carbon emissions by 30% by 2030.

Hamilton County voters approved a new sales tax in 2020 that will inject tens of millions of dollars into local public transportation in regional transportation.

Because of the Green Cincinnati Plan and other strategies, Cincinnati has seen a 37.8% reduction in carbon emissions since 2006, according to city statistics. More than 20,000 tons of local recyclable material get diverted from the landfill every year.

“As exciting as these successes are, we know there’s so much more we have to accomplish,” Owens said. “This renewal (of the Green Cincinnati Plan) is a tremendous opportunity to reconsider our goals of the past and to challenge ourselves to aim for higher goals in the future.”

No looking back: Need to be more aggressive with goals moving forward

Owens’ point is relevant considering a recent climate study suggesting that aiming higher in terms of carbon reduction may be less of a goal than a necessity.

A report by the Intergovernmental Panel on Climate Change concluded that despite global efforts to reduce carbon emissions over the past decade, those numbers have actually increased since 2010 “across all major sectors globally” because of human activity.

The IPCC report shows the world needs to “go bigger and we need to go faster,” Michael Forrester, who leads the city’s Office of Environment and Sustainability, said at the time of the release. “It doesn’t mean that we’re doomed, but it requires action. And that really is what the Green Cincinnati Plan is — it’s our plan of action.” 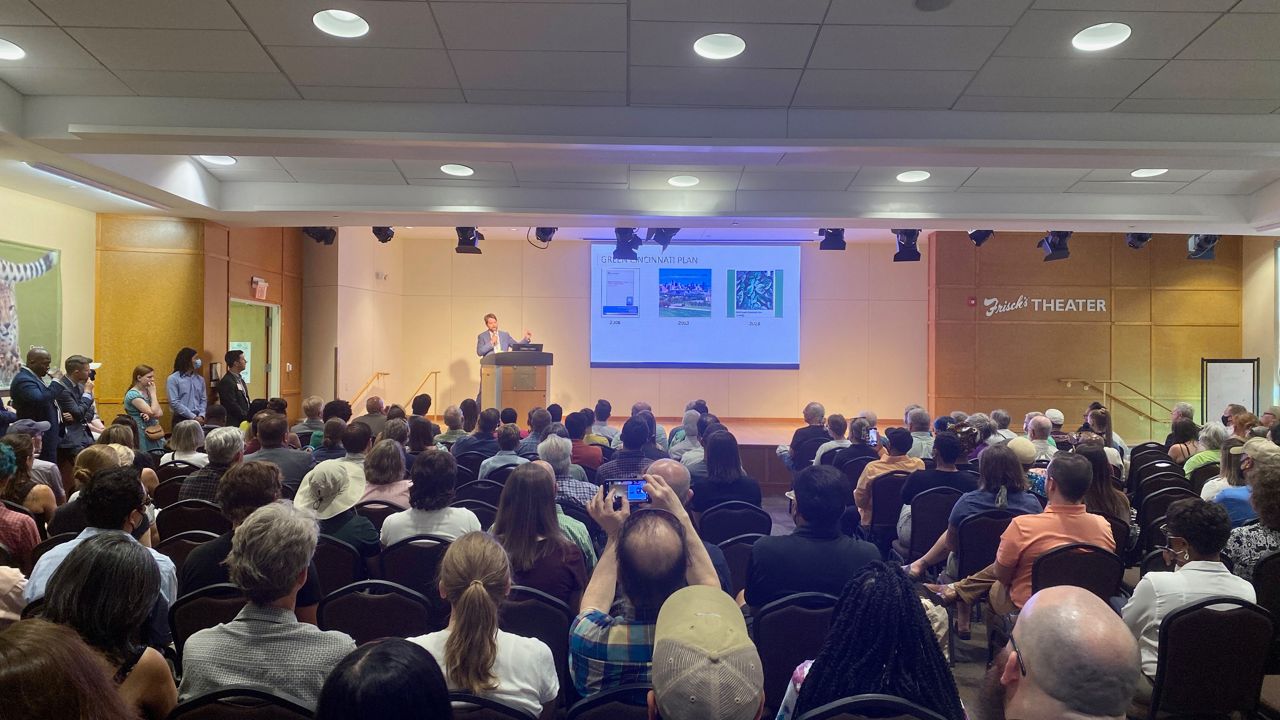 Michael Forrester, who leads the Office of Environment and Sustainability, speaks during the opening meeting of the 2023 Green Cincinnati Plan update process. (Casey Weldon/Spectrum News 1)

In recent months, the city has launched several environmentally focused initiatives, including a commitment to have an all-electric fleet of vehicles by 2035 and installing additional solar panels and improving energy efficiencies at nine city facilities. They've also made considerable investments in bicycle infrastructure and safety.

The city created and invested $100,000 in the Green Cincinnati Fund, money dedicated to environmental projects.

But through this project, the city hopes to do more, said Ollie Kroner, who leads sustainability efforts to the city.

The 300 or so people who attended Tuesday’s kickoff offered feedback on what it should include. They took part in breakout sessions focused on eight themes, ranging from food to transportation to buildings.

Participants floated between the rooms led by members of the steering committee Beyond taking part in conversations, they also posted notes with neighborhood-specific concerns and recommendations on oversized poster boards, each with its own prompt.

The group will turn those notes into information used at future public meetings. There are 30 meetings planned over the next year.

“For the past 15 years, the city has had an 80% by 2050 decarbonization goal and we are on path to meet that, but science that’s come out tells us that’s not enough,” Kroner said. “We’re looking for the best, biggest and boldest ideas to get us where we need to be.”

Chance to build a more equity city for all

A major focus of this update will be equity.

Cincinnati’s “urban heat island neighborhoods” — those with a lot of impermeable surfaces like parking lots and large buildings — can get up to 12 degrees warmer than those with more tree canopies and green spaces.

Data shows neighborhoods with less green space get much hotter than those with more green space. More heat means higher utility bills and extended exposure can lead to health issues, like heart and breathing troubles.

“We have designed cities that require parking for all new construction, but now across America, we have eight parking spaces for every car. We’ve paved most of our urban core; now we have urban heat island issues, we have storm water runoff issues,” Kroner said. “Over and over again, you see how we’ve scripted the problem into existence.”

This Green Cincinnati Plan renewal process has to be intentional about targeting the historically underrepresented communities they know climate change will disproportionately affect, according to Ashlee Young, with Interact for Health. Otherwise, the group will just end up discussing the same issues five years from now during the next update. 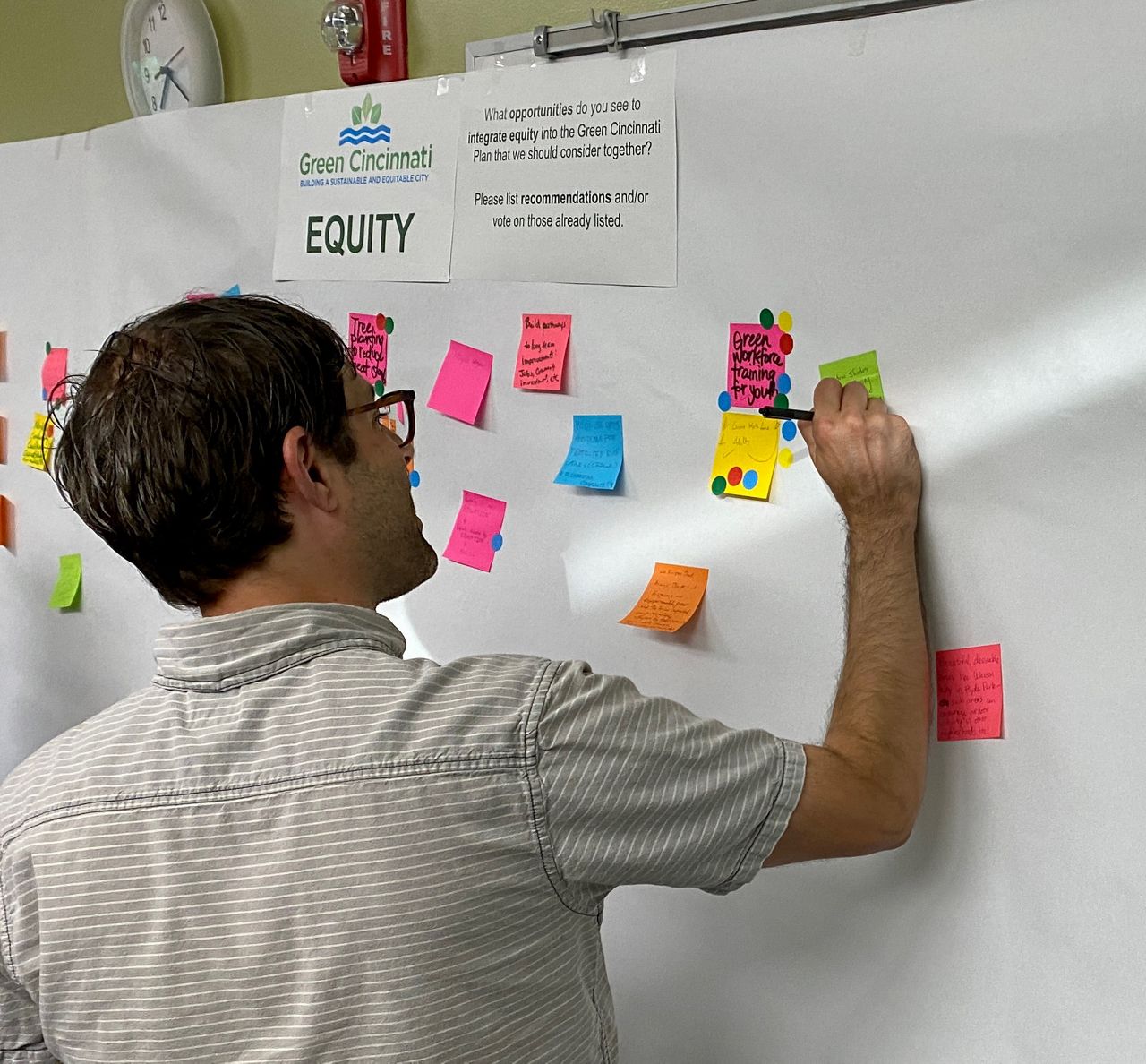 Tanner Yess, with Groundwork Ohio River Valley, said a key component of the Green Cincinnati Plan is the fact residents are involved. They not only get to hear academics and city officials talk about climate change, but they’ll be a key part of those discussions, listing concerns in their specific neighborhood. They may even be the ones to come up with the solutions to those problems.

“The environment, conservation and sustainability, in terms of equity and social justice, are inextricably linked, especially as it relates to climate change,” he said. “The social justice issues we see in society, whether it’s segregation, transportation, housing — they’re being compounded by climate change and impacting those who were more vulnerable to begin with.”

Groundwork Ohio River Valley will be a key player in the engagement process for the Green Cincinnati Plan.

Getting people to take part who’ve historically not received an invitation “to the table” is one problem the steering committee and Groundwork Ohio River Valley will hope to address, Yess admitted. To address that problem, the organization plans to use an aggressive canvassing campaign focused on the real-world effects of climate change.

That's important, Young said, because oftentimes when people talk about climate change, they use language that isn't accessible to everyone.

Chance to provide feedback online or in person

During the last update, the city received over 1,400 comments from residents. Officials hope the number will increase this year because of a bigger emphasis on community engagement. The city doubled its usual financial commitment to outreach efforts this year.

Times and dates for future meetings aren’t yet available. The city will post meeting updates on its Green Cincinnati Plan website.

“You could feel the energy in the room (Tuesday) night. This is clearly an issue that’s important to the people of Cincinnati and it’s an issue they want to lend their voice to and give solutions to help solve that problem,” Kroner said. “They’re planting the seeds and ideas that will ultimately give shape to this plan.”

The steering committee aims to have the final draft of the Green Cincinnati update by year’s end, City Council will then vote on it, likely in spring 2023.