AI, Biomaterials, Circularity: The A-B-Cs of a Flourishing Future

If good stories can change the world, they are likely to originate on a local level. Case in point: the 2030 Districts Network — whose mission is to establish a global network of thriving, high-performance building districts and cities, uniting communities to catalyze transformation in the built environment and the role it plays in mitigating and adapting to climate change, by 2030. This story begins in Seattle, Washington, but is now told in 22 cities, perhaps nowhere as effectively as in Cincinnati, Ohio.

New Models for Urban Sustainability: The Power of Uncommon Partners and Digital Storytelling 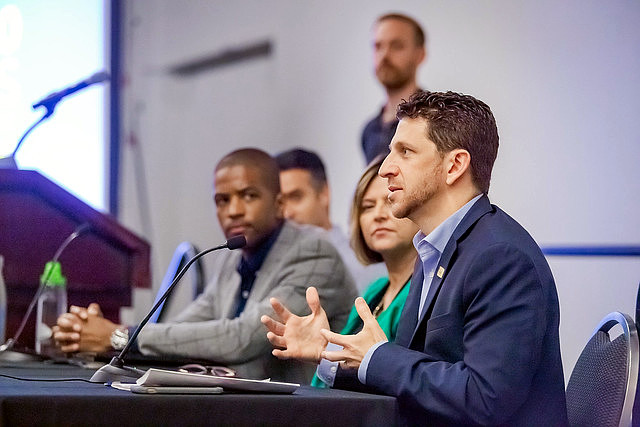 The story of Cincinnati’s District began with the Green Cincinnati plan — 80 recommendations over eight areas that resulted from 30 community meetings and countless hours of investment from individuals with a passion for impact — including Phillips, who was leading the built environment group.

“While cities love to use their skylines as their symbols, our buildings in Cincinnati account for 60 percent of all our carbon emissions,” Phillips explained.

Green Cincinnati also received support from Newsy’s Brownell and Maiocco, who explained their company as a source for concise, unbiased video news and analysis. The company strives to fuel meaningful conversations by highlighting multiple sides of every story. As the possibility of a 2030 District emerged, they stepped up to help make it happen through telling a compelling story. They conducted interviews with local stakeholders and directors of nearby Districts, including Cleveland and Detroit. The result was an impactful documentary, “Modern Metropolis” (premiering late 2019), which our group was able to preview. We also saw highlights from Newsy’s “Shifting Baselines” series, produced in partnership with SB. The company’s media is accessible in 40 million homes.

Also leading the effort, both with the city and within his own company, was Faust. “Fifth Third Bank has some bold environmental goals,” he noted. The company has pledged to reduce energy and water usage, reduce landfill waste, reduce greenhouse gas emissions and purchase 100 percent renewable power. Faust saw supporting the creation of a District in Cincinnati as important step for the city and other companies.

The Districts are led by the private sector, with local building industry leaders uniting around a shared vision for sustainability and economic growth — while aligning with local community groups and government to achieve significant energy, water and emissions reductions within its commercial cores. Property owners, managers and developers join their local 2030 District to help them make significant changes to their properties to create the reductions necessary to transition to a low-carbon economy.

The session not only explored the 12-month evolution and launch of the Cincinnati 2030 District, but also touched on the Detroit 2030 District, exploring the difficult and often surprising cultivation of leadership, partnership development and storytelling it takes for this new national model for urban sustainability to gain support.

The first half of this workshop examined how 2030 District projects work and what roles brands play in them, and the second half focused on the power of video storytelling in helping uncommon collaborations succeed. Perriard closed the session by sharing some of the Good Life research that has been done around societal aspirations, and introduced the movement and hashtag of #BrandsforGood — a note to attendees that while the session had to end, storytelling for impact is just getting started.